In September of 2019, my friend and I journeyed to an indigenous Art Gallery within the city of Osogbo and even though it was nothing like our visit to Genesis Art Gallery or Nike Art Gallery, we were both amazed with our findings at El Carvar.

El Carvar Art Gallery may not be one of the most beautiful galleries out there, but trust me, it’s not always about aesthetics. There’s a whole world of art and craft that you’d like to see within its walls.

A strikingly impressive student-teacher relationship is noticeable even by first timers and the dedicated students begin wood carving after a not-so-easy three months of drawing and painting exercises.

When asked about the future of the Gallery (EST. 1989), Mr Collins, a cofounder and part time government worker said, “this building would hopefully undergo renovations after a successful art exhibition in Benin City.”

Fun Fact: Mr Collins father was a wood carver while his mother, a potter.

Students groomed in the Gallery knew their craft well, like one Segun Owolabi who had the opportunity to train under Jimoh Braimoh after a Facebook Post of his granite stone carving, Osun river goddess – Yemoja caught the maestro’s attention. Majority of other artworks also glorified Osun goddess or similar Yoruba deities. 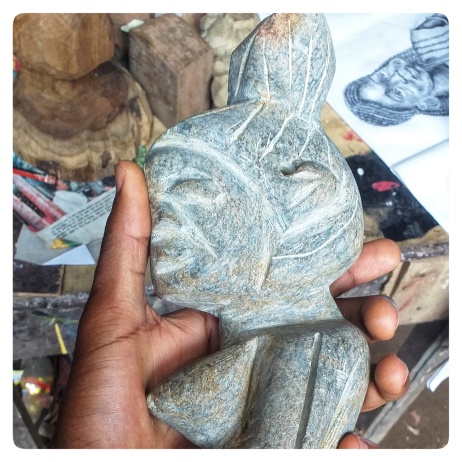 Fun Fact: Segun had to specifically outsource the granite stone used on the carving/river goddess from Idi Road in Ekiti state.

Out of curiosity, I questioned Mr Collins about his belief in the Osun river goddess which he replied that he heard stories and knew for sure that the apprised deity existed…

A few years ago, one of Mr Collins friends, Tokunbo went for a relaxing swim in a river near Calabar. While swimming, he found a pretty necklace which he took home and at midnight, Tokunbo had a dream where he saw the river goddess commanding him to return the necklace or die!

Also, the goddess promised to make him extremely wealthy if he returned the piece of jewellery without telling anyone about the encounter but Tokunbo couldn’t keep his mouth shut and told someone (probably Mr Collins) then the money stopped coming.

Tokunbo never stepped foot in the river again for fear of being murdered by Yemoja, the river goddess.

As usual, I invite you to write in the comment box below what you think about El Carvar Art Gallery and share if you’ve ever visited or if you’ll like a visit.

For more travel related content, check my other channels on YouTube – ericotrips network or Podcast – The ERICOTRIPS PODCAST.

Thanks for reading, watching or listening.
Have a great day and Don’t forget to drink water.

Hello there! I'm a Lagos based travel blogger who is enthusiastic about the experience travel and tourism offers in Nigeria and beyond. I love to talk about different means of travel, share travel photos and unlock several tourist attractions. Thanks for visiting my Blog. View all posts by Eromonsele Emmanuel

5 thoughts on “FORGET THE BIG NAMES, VISIT THIS ART GALLERY IN OSOGBO”

Chat with me on WhatsApp