March 21, 2020. We jumped between the incredibly high trucks, and Otolo, our bus driver accelerated hard with a roar as we made a suicidal right turn to the edge of the road. At first, it looked like he’d been asleep on the steering wheel but he wasn’t, we just had a freaking brake failure!

Following the increase of Coronavirus cases in Lagos and the rest of the nation, the Federal Ministry of Education in late March announced the closing of primary, secondary and tertiary schools.

That Saturday morning, after the news of Ambrose Alli University shutting its doors officially broke, Ofure, a student of the institution quickly put her stuff together before hurrying to catch the first bus from Edo to Lagos.

Let’s switch the mic, shall we.

Allo, this is Ofure speaking…

Of course, many students knew that they would go home either because of the two-week ASUU warning strike or the Coronavirus pandemic. It just had to be one!

I relayed the situation in Edo to my family, and although there wasn’t a single reported case of Covid-19 at the time, we heard rumours of a couple of positives in Irua Hospital.

About 24 hours before take off, I arranged for a Keke Napep to carry my luggage to the school gate. That evening, my friend, Blessing and I visited God is Good Motors (GIGM) for bookings but all trips to Lagos before nine a.m. were pre booked. Argh! 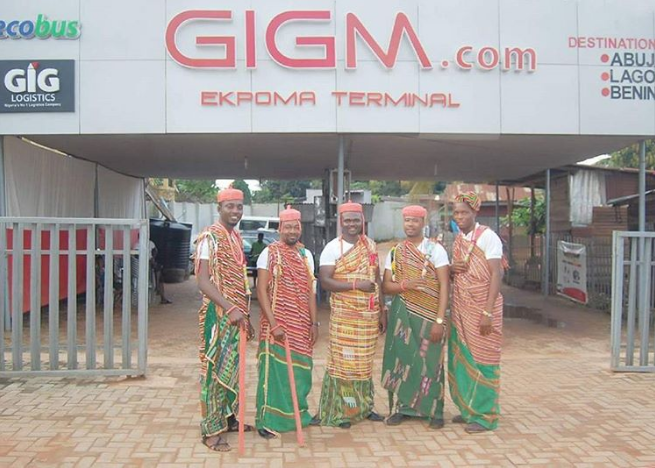 The next day I stayed up early waiting on the Keke rider but after six a.m., six-fifteen a.m., and six-thirty a.m. I decided to take my first steps when he just didn’t show up.

My trek to the gate wasn’t a lonely one as other students were also up that early, school was basically running empty with every second that passed. And I didn’t hustle hard before getting a motorcycle to the bus station.

I arrived at the bus station at exactly six-forty-five a.m. and I had to make do with these terrific guys because I couldn’t wait on GIGM.

It was very rowdy here and there were about half a dozen buses actively stationed and loading with passengers.

If you care to know, this other bus park is located along Benin-Auchi Road, Opoji Junction, Near Musco, Ekpoma, Edo state.

Compared to the GIGMs 4,500 Naira bus fare, these transport workers charged only 3,500 Naira and unlike the former, there was no provision for air conditioning.

All right, this day couldn’t get any worse, I thought, watching as fellow students hustled their tickets. I leaned back in the seat. Otolo, a short dark skinned man who wore boots that looked like a crossover between brogues and loafers put the vehicle in gear and our journey kicked off.

We sat in threes, four in the rear, had moderate cargo and no one was particularly wearing a facemask.

Was I going to miss Edo state? Definitely yes! The cultural music, my school work and colleagues and of course, Benin City.

The capital of Edo is one of the oldest cities in Nigeria and the ancient Benin Kingdom with its impeccable Obas, sophisticated bronze artworks and brilliant society dates back to pre colonial years. It was formed around the 11th century.

Our regular three-hour trip to Lagos was extended by at least an hour, thirty minutes because of our maniacal driver’s sheer carelessness.

Recommended: ROADTRIP FROM OSOGBOLAND TO THE ANCIENT CITY OF ILE-IFE

First, he went missing when we took a lunch break at Ore, a popular area for travellers going through Odigbo, Ondo state. There I had a sumptuous rice and suya delicacy.

By now, we’d hardly covered half of our trip.

The folks that could search searched and it was in all this confusion that a lady sitting beside him revealed she had spent most of her time waking him up.

It wasn’t until twelve noon before we sighted Otolo, and he was very unapologetic. Anyhow, we got in the vehicle to finish the rest of our journey, now remaining about 123 kilometers to the nation’s economic capital.

Final Minutes, So I Thought…

I really didn’t know what was coming.

We just swerved off the highway to avoid a collision with two trucks. And Otolo was really beginning to get on everyone’s nerves now, first the delay at Ore, then this! What the…

He later explained that it was ‘just’ a brake failure and everyone somewhat heaved a sigh of relief, we escaped what could have been a scary situation.

After pulling over, he alighted and the next time we saw our driver, he was with a mechanic.

The lanky fella examined the bus and said it would cost 2,000 Naira to fix the bad brake. This was when Otolo’s screws got loose, he argued that the same repairs could be done with 800 Naira back in Ekpoma.

During the prolonged confrontation, we sheltered under a shade and had refreshments from a nearby shop.

“No brake wahala again. Oya let’s move.” He said when repairs were concluded.

The journey resumed until we arrived at Mowe Ibafo in Ogun state with mo problemo.

One of the rear tyres burst and since traffic into Lagos was hectic, few minutes to Lagos could as well be one hour plus now.

Again we pulled over and like you, I expected the driver to quickly set up a spare but instead he dropped a bombshell. “Spare tyre no dey this motor o.”

No spares?! Now that’s a load of crap!

A couple with a baby couldn’t endure any further delays so they abandoned ship and took the next danfo to Lagos.

How insensitive could a man really be? Putting fourteen persons on the road with no spares and a bad brake.

The complaints came one after the other and that’s when he proclaimed as if proud of himself, “everything no be my fault abeg, make una complain give the company.”

I was beginning to think that Otolo lacked the ability to read a room because most passengers were students. I mean, he was so nonchalant that an overly aggressive person could have beaten him to a pulp!

After the bad tyre was fixed, we joined the gridlock and continued our journey slowly to Ojota where I reunited with my family in Lagos.

This was a hell of a ride and I wish I had taken GIGM instead.

Although Otolo acted like a fool throughout the journey, his misgivings kinda brought us closer together.

Back in Ekpoma, passengers had their eyes either on the road or glued to phones but from the delay in Ore, brake failure to burst tyre, everyone had some choice words to say about him.

At the time of travel, there were barely fifty positive cases of Coronavirus in Nigeria but now, it’s in the tens of thousands! The academic community sure dodged a bullet.

Ha! That reminds me, when we had the brake failure, a lady made a statement that was pretty serious at the time. She said, “anytime I enter bus, there’s always an accident.” Her tone was so trivial and she seemed surprised when everyone actively shifted away.

Who knows, maybe she was the bad omen.

When was the last time you travelled during this pandemic? How was it?

In Nigeria, there’s currently a nationwide interstate travel ban and commuters within Lagos must adhere to strict transport guidelines, see them here.

Is there a travel ban in your country or are people still free to move about?