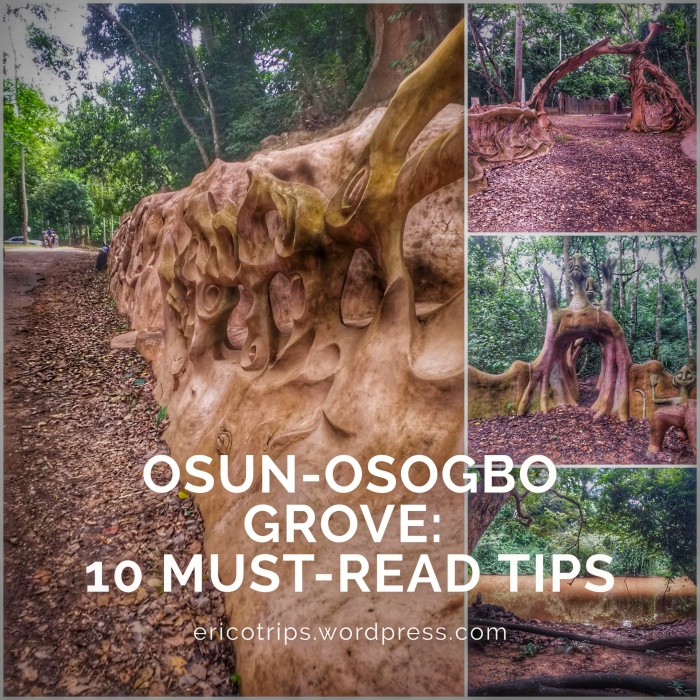 A UNESCO World Heritage Site, the Osun-Osogbo Grove located in Osun’s capital city is a popular tourist destination. Its rich cultural background fascinates art enthusiasts, travellers and yoruba religion devotees from all over the world.

I first read about it on Amarachi Ekekwe’s and Diusor Odiakosa’s Blog and I was really inspired by their articles. After some planning, I visited Osun-Osogbo Grove this year.

I first went to see a friend perform at Osogbo City Stadium before heading to Osun-Osogbo Grove. It’s the largest (75 ha) and last of sacred places that once characterised yoruba settlements.

The trip from the Stadium was barely 30 minutes. By then, the morning sun was completely out and the forest breeze was clean. It was truly a perfect day to visit the hotbed of yoruba culture.

The Osun-Osogbo Information Centre was only a few steps ahead. I inquired from the personnel how much a tour would cost and she gave the breakdown.

I actually paid a discounted fee because of my “Osun Kofa” status at the time. She asked if I wanted a Tour Guide and I insisted on having one.

While waiting, I recalled two misconceptions I read online about the Grove.

My Tour Guide – a middle aged man was a graduate of archeology and he was so knowledgeable. We exchanged pleasantries and he started with the Grove’s origins.

Osun-Osogbo Grove dates back to 1670 AD. A hunter named Olutimilehin discovered Osun River while in search of water, he informed his King, Oba Larooye Gbadewolu and subsequently, the entire community settled near its banks.

Fun Fact: According to local mythology, Osun River is one of the Orishas who turned into flowing waters.

In the course of farming, a tree fell and this angered Osun, “Laro! Timehin!! You have broken my dyeing pots.” She said. To appease the goddess, the villagers built shrines and offered sacrifices. In return, she gave them prosperity and protection.

A different version is she appeared to Olutimilehin and requested that Osogbo be made the capital city. I was particularly interested in the sculptures so I asked the tour guide for info.

Most of the clay sculptures were dedicated to deities in yoruba cosmology. It’s fascinating that they all had names like Iya Mapo, Obatanla, Aje, Yemoga and Oya.

We followed a path to the “spiritual” bridge where some mosquitoes bit me. It wasn’t a good choice that I wore T-Shirt and Shorts.

All through the tour, I took photos with my phone and even though photographs were restricted to certain areas, I had shots of flora and fauna, public paths, sculptures, Osun river etc.

I couldn’t help but notice white-throated monkeys because they were jumping all over the place. It seemed like the endangered species were very familiar with human presence.

#TIP 6: Animals in the forest are a physical manifestation of Osun River Goddess. Do not Feed or Hurt them.

The suspension bridge tho a little rusty was fully operational. Constructed by European colonial masters in 1935, it aided transportation of farm produce for so many years.

I was halfway through the bridge when the Tour Guide jumped! He really got me because I gasped for breath plus it vibrated a lot before becoming stable. Get prepared for such tricks if you’re visiting Osun-Osogbo Grove.

I anticipated seeing the other side of the bridge but he discouraged me saying there was nothing beyond apart from arid farmlands. Until today, I doubt that information. I didn’t want to break any laws so I yielded.

The Temple was our next stop. Getting there, the Chief Priest hit a pan twice before instructing me to be quiet. I was confused until the Tour Guide whispered, “He’s going to give the goddess breakfast.”

Fun Fact: The Chief Priest must not speak to anyone while going to feed the goddess.

Before preparing a meal for Osun, the Chief Priest offers prayers to discover what she’d like, the requested victuals are then thrown into the river. Most times she eats pap and eko.

At the river, it is forbidden to bath, swim or fish. It’s also popular belief that if the river goddess grants your requests, you must make pilgrimage to the annual Festival. If not…

For two weeks every August, Osun worshippers converge to celebrate the river goddess. I would have loved to attend the last one but I was in Lagos for an event at Bics Garden and Boat Club.

[READ: 5 MIND-BLOWING FACTS ABOUT MY FIRST VISIT TO BICS GARDEN AND BOAT CLUB]

1. IWOPO: traditional cleansing of Osogboland.
2. INA OLOJUMERINDILOGUN: lighting of 500 year old 16-point lamp.
3. IBORIADE: assemblage of crowns of past rulers, Ataojas of Osogbo for blessings.
4. ARUGBA: presentation of gifts, sacrifices and prayers to the River Goddess.

Osun-Osogbo Grove exists today because of Susanne Wenger and New Sacred Art Movement. They rebuilt and protected it from poachers, land speculators, art thieves and fishermen.

#TIP 9: Be Careful with your Cash and Valuables during the Osun-Osogbo Festival.

In the end, I wanted to buy some souvenirs for my trip but unfortunately, I didn’t bring enough cash and they were quite pricey.

I concluded my tour by eating at a “Buka.” I had Fufu and Ewedu garnished with Goat Meat and a chilled bottle of Coca-Cola.

YOU CAN LEARN MORE ABOUT OSUN-OSOGBO GROVE

It was fun exploring Osun-Osogbo Grove. As a rainforest, it’s impressive it has remained independent, slipping the clutches of urbanization.

Hello there! I'm a Lagos based travel blogger who is enthusiastic about the experience travel and tourism offers in Nigeria and beyond. I love to talk about different means of travel, share travel photos and unlock several tourist attractions. Thanks for visiting my Blog. View all posts by Eromonsele Emmanuel

29 thoughts on “OSUN-OSOGBO GROVE: 10 MUST-READ TIPS FOR EVERYONE”

Chat with me on WhatsApp